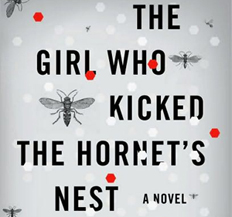 [Spoiler alerts inevitable here . . . ] I just finished the third book in Stieg Larsson’s Millennium series and have to report that I’m already mourning the loss of what turned out to be a fascinating and compelling cast of characters. Motoring through The Girl Who Played with Fire and then the last book, I found myself turning pages not as much to see what would happen, as Lisbeth Salander’s vindication seemed inevitable throughout, but more because I’d come to actually care about the characters and their victories over injustice. I was also frankly curious to see whether Larsson could maintain his even-handedness about gender issues, and was pleased to find that in subtle ways, he emphasized his liberal feminist commitment even further as the series progressed.Although she was locked up in a hospital room and then a prison cell through 85% of Hornet’s Nest, Lisbeth Salander continued to be one of the most intriguing characters I’ve come across in genre fiction. Her recovery from the near-fatal gunshot wound administered by her own evil father, the Russian defector Alexander Zalachenko, keeps her under the watchful care of an increasingly sympathetic doctor. The security guard stationed outside her door through most of the last novel makes her usual sexual rendezvous impossible until the book’s end.

But nonetheless, the third book demonstrates even more powerfully how Lisbeth’s history of physical and emotional abuse has trained her to use her mind to protect herself from situations and people intent to manipulate or harm her. Her photographic memory allows her to reread huge academic tomes of scientific and mathematical scholarship in her head, so that putting her in sensorially deprived situations like prison or an interrogation room can’t isolate her as much as intended.

Larsson’s descriptions of Lisbeth working out equations nearly in three dimensions as she watches them form in the air offer compelling examples of a brilliant woman whose life-long disempowerment has forced her to keep her own counsel and refuse to communicate according to social dictate. The scenes in which Lisbeth infuriates police and corrupt psychologists are paragons of resistance, in which through her stony silence and implacable gaze, Lisbeth turns the tables on her interrogators and gets the upper hand by removing her soul from the proceedings and enabling herself to survive.

Toward the end of Hornet’s Nest, Larsson begins his chapters with historic tales of Amazons and other women warriors, clearly analogizing the proceedings to those stories of female battle and supremacy. Those passages seem a bit out of place and sometimes heavy-handed, but Larsson meets his own challenge by unraveling this final book with his female characters firmly in control. Lisbeth might be silent, but when her faithful friend, the investigative journalist Mikael Blomkvist, arranges to have her her hand-held computer smuggled into her hospital room, her IT skills allow her to solve a subsidiary mystery in the story and contribute mightily to her own liberation.

Annika Giannini, Blomkvist’s women’s rights lawyer sister, takes up Lisbeth’s case with righteous feminist zeal to devastate the prosecution’s case against Lisbeth in the book’s climactic trial scenes. She uses to her own advantage her colleagues’ doubts about her qualifications to defend the notorious Salander, saying little through the trial’s earliest testimony. But when the evil Dr. Teleborian takes the stand, Annika radiates feminist ire and scorn, dismantling his fabricated psychological assessment of her client and finally publicizing the lies that have kept Salander a legally incompetent ward of the state since she tried to kill Zalachenko with a Molotov cocktail when she was only thirteen.

The scene of Annika’s triumph is a feminist fantasy of speaking truth to power, a brilliant take-down of a pompous pedophile who’s been used by the shadowy Secret Police sub-unit the Section to help protect their Russian charge.In the limited way she can, Lisbeth comes to trust and appreciate Giannini’s skill. The last time they meet, she even propositions her lawyer, inviting her over for a night of casual sex of the only sort Lisbeth entertains—no promises, no complications, and no commitments. Giannini laughs and declines her offer with thankful appreciation, delighted that Salander is the first client who’s ever propositioned her.

Lisbeth’s vindication also makes hay with the prosecution’s attempt to portray her as a lesbian Satanist (the only scare word missing from Larsson’s taxonomy is “feminist”). The book’s villains are the homophobes, like Detective Faste, who joins forces with the narcissistic and inept prosecutor Ekstrom to bring Salander down by feeding the press misinformation about the woman’s debauchery.

Likewise, Jonas Sandberg, the Section’s young operations professional who does much of the older generation’s legwork in Hornet’s Nest, is also homophobic, describing the Millennium journal’s gay art director as a “faggot.” Faste and Ekstrom’s ignominy is publicized, and Sandberg, too, is taken down when the specially appointed (female) prosecutor arrests him and his older cronies on the third day of Lisbeth’s incendiary trial.

The book, then, not only allows good to triumph, but also promotes a kind of liberal humanism that emphatically includes women, lesbians, gay men, and immigrants under its enfranchised bailiwick. Even Erika Berger, in the book’s subplot, triumphs in a distinctly feminist battle with the staff and board of directors of Sweden Morgen Poste (SMP), the Stockholm daily newspaper she’s recruited to turn back from the brink of extinction. Her ballsy approach to editing the paper incurs the wrath of a deep network of good ole’ boys, and Larsson doesn’t skimp on clarifying that the backlash against Berger’s leadership is distinctly gendered.She’s targeted for a slander campaign by Peter Fredericksson, an assistant editor who appears to be her supporter at the paper, but turns out to be behind the “poison pen” emails sent to Erika at SMP and disseminated under her name. After reading online from her hospital bed that Berger’s house has also been attacked, Salander uses her hacking skills to unmask the stalker, despite her lingering jealousy over Erika that forced Lisbeth to bleed away her feelings for Blomkvist.

That Fredericksson was a one-time schoolmate of Berger’s, holding a grudge because she never gave him a second look during high school, is one of Larsson’s only rather dubious plot resolutions. But the subplot allows Berger to employ the same kind of feminist invective that comes in handy for Giannini, and also lets Berger establish a friendship with Susanne Linder, the employee of the stalwart firm Morgan Security, who’s employed to protect Berger from her attacker. That Erika and Susanne cross what are no doubt class lines to form a fast and easy, mutually admiring friendship is also a pleasurable aspect of Larsson’s final book.

Once they meet, as the “good” division of Sapo intersects their investigation with Blomkvist’s and Morgan Security’s, Figuerola makes the first pass at Blomkvist, which he accepts and begins the affair that ends the book and that might just also end his long-term relationship with the married Erika. That Blomkvist and Monica talk so quickly of love sounds another slightly false note, even though Larsson takes pains to describe the large and unwieldy passion that draws them together.

Blomkvist protests that he’s never been a one-woman kind of man, and Figuerola, too, hasn’t been inclined toward monogamy and marriage. But for some reason, in one another’s arms, they’re willing to rethink their resistance to convention. Too bad.

Lisbeth, though, seems apt to continue her randy, non-monogamous ways. It’s still refreshing to read a female character who’s casual about sex, who likes sex for physical, more than emotional, reasons, and who won’t truck with the elaborate and typically gendered plots of seduction. When she’s finally released from the hell of her hospitalization, imprisonment, and trial, she escapes to Gibraltar to see how her financier has been handling her wealth.One night, she arranges a tryst with a middle-aged, overweight, ordinary German businessman she sees alone in the hotel bar speaking to his wife on his cell phone. She follows him into the elevator and offers him sex with no strings attached. Incredulous but finally game, the businessman spends several nights with Salander until his guilt gets the better of him. Larsson portrays her sexual escapades as guileless and straightforward, not at all the depraved stuff the evil Teleborian tried to describe as evidence of her social pathology.

The finale of Hornet’s Nest wraps up the story’s various subplots with more or less panache. Larsson introduces a multitude of characters into this final book, as he reveals all the details of the establishment and ultimate downfall of the Section for Special Analysis of the Swedish Secret Police. Prime ministers, state secretaries, justices, and various detectives, police, and security operatives play their roles in the conspiracy to protect Zalachenko at all costs. The rogue’s gallery of villains are apprehended and charged one by one at the story’s end, but Larsson leaves the missing monster Ronald Niedermann until almost the end.

Forced to address her father’s estate, Lisbeth notes with curiosity that he’s bought an old, rundown brickworks factory in a suburb of Stockholm. When she travels to see it for herself, Lisbeth stumbles onto her half-brother’s hiding place and is forced to confront the last vestiges of her genetic relationships. Niedermann traps her in the factory, but with her typical ingenuity, Lisbeth not only frees herself, but sees to it that justice is meted out to Niedermann while keeping her own hands clean.

The only thread left unraveled is the mystery of what happened to Camilla, Lisbeth’s twin sister. Perhaps Larsson had something planned for Lisbeth’s identical other, the one who protested her father’s innocence and played into the Section’s hands. I can’t help wondering what a showdown between Lisbeth and Camilla would have been like, given Lisbeth’s insistence on maintaining sharp emotional borders. How might a look-alike sister have triggered her deep emotional well of frustration and anger? Larsson’s untimely death just before the trilogy was published in Sweden means we’ll never know.

Happily, though, Lisbeth’s last act as a character is to allow Blomkvist back into her life as the friend he insists on being. Salander spends a rejuvenating three months in Gibraltar and, on her financial investor’s advice, takes a two-week trip to Paris to make amends with Miriam Wu, her occasional lover who was nearly killed by Niedermann in The Girl Who Played with Fire (and rather improbably saved by the boxer Paolo Roberto, another friend-of-Salander who happens to be in the right place at the right time).

When she returns to Stockholm, intent on upholding her duty as a citizen to see through the legal proceedings against her tormentors, and after she dispenses neatly with her half-brother, Lisbeth realizes she no longer has feelings for Blomkvist, which allows her to open her door to him as her friend.

The moment is an appropriate conclusion for the character and for the story—rather unromantic and unsentimental, but true to the spirit of the “girl who” really turned out to be quite a woman after all.

3 thoughts on “The Girl Who Kicked the Hornet’s Nest”