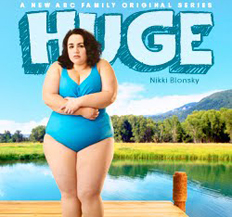 Winnie Holzman, who wrote the libretto for the blockbuster Stephen Schwartz musical Wicked and the 1990s television show My So-Called Life is back on tv co-producing with her daughter, Savannah Dooley, ABC Family’s summer show, Huge. The story, based on Sasha Paley’s book of the same name, is set in a summer camp for overweight kids (what used to be called disdainfully a “fat farm”), run by a bi-racial woman who has eating issues of her own.

At first glance, the premise seems vaguely offensive. The advertisement, which shows series star Nikki Blonsky (of John Waters’ 2007 Hairspray remake) in a teal one-piece bathing suit looking embarrassed, signals everything that could stink about a show like this. But instead, after watching the first two episodes, I think Holzman and Dooley are doing something much more subversive: creating a television series about overweight teens that’s utterly sympathetic to their self-image issues and at the same time critical of a culture that peddles extreme thinness as a way to sell products and impossible dreams of oxymoronic skinny healthiness to young women.

Blonsky is largely responsible for delivering the show’s critique. She plays Willamina, a teenaged girl furious with her disapproving parents for sending her off to this camp in the first place. She prefers to be called “Will,” signaling both her defiant gender-blurring and her determination not to cave in to public pressure to be thin. She’s proud of being an “angry feminist,” as she calls herself, and decorates her bunk with cut-outs from magazines, using their impossible images of thin women to form letters into words that spell “stop body fascism” and other anti-weight loss messages. That she’s the voice of resistance in a machine trying to help kids conform makes Will one of the most interesting teenage characters I think I’ve ever seen on television.

Gina Torres (I Think I Love My Wife) plays the camp’s biracial owner, Dr. Dorothy Rand, who employs her once estranged white father as the camp’s cook. Although the backstory for their revived relationship and Dorothy’s anxious rapport with her mother has only been hinted at, strain is apparent in Dorothy’s inability to tell her mother about her father’s new presence in her life. The second episode reveals Dorothy’s own eating issues, as her father makes her a “healthy” blueberry muffin that she at first resists, and then unwittingly devours as she’s trying to type out a truthful email to her mother, which she continually deletes.

Already, one of the summer’s residents has been expelled for throwing up (no bulimics allowed here), and her replacement, too, has departed, after suffering extreme anxiety when she’s removed from the gauzy over-protection of her over-weight parents and younger sister. But the remaining kids—especially the girls, on whom the series focuses—are all fairly well-adjusted and insistently “normal,” which makes their weight just another issue to address on their way to adulthood.

Typical kid stuff ensues. Chloe Delgado (Ashley Holliday) keeps secret that her brother, Alistair (Harry Guillen), is also a camper. She hangs with the cool kids, while he seems rather fey. In a nod to Holzman’s musical theatre hit, Alistair wears a Shiz University t-shirt, product placement for Wicked but also perhaps a signal that he’s a budding musical theatre queen.

Alistair and Chloe meet alone in the woods to share news of home and the care packages their mom sends. He tolerates the pretense with a bit of sarcasm, while she feels separating from her brother is necessary to secure her role in the girls’ hierarchy. At night, though, she wears a braces retainer with a harness that circles her head and makes her talk with a lisp, hardly a sign of “mean girl” status.

Most of the girls pop in their teeth-straightening devices at the day’s end, a reminder that despite what sometimes seems their sophistication, they’re still kids. And they’re all staunchly middle class, though fairly diverse racially. One of the lead characters is Will’s best friend, Becca, who’s African-American and wonderfully played by Raven Goodwin, who made her screen debut at eight-years-old as the wise-beyond-her-years kid in the film Lovely and Amazing. One of the boys, Ian Schonfeld (Ari Stidham), wears a big Jewish star around his neck, and several of the campers look racially and ethnically mixed. This, along with the size of the actors, provides a refreshing change from the all-white, svelte profile of most situation comedies.

In fact, Huge really isn’t just a comedy. Although the writing sometimes falls into cliché, with the kids responding to one another’s crises with predictable, wince-inducing platitudes, the show also takes seriously the angst of growing up in a body that doesn’t conform to impossible cultural standards. Will’s refusal to acquiesce to conventional body image offers a refreshing perspective on a wider range of young women’s desires.

The fit, athletic physical profiles of the camp counselors and staff, however, secures the model to which the campers are supposed to aspire. But these characters, so far, are all a bit daft, which undercuts what might be the mocking hegemony of their thinness. The girl’s counselor is well-meant but sweetly clueless, sweeping trauma under a very heavy rug and donning very rosy glasses to cheer her girls on their way to weightlessness.

The hot, deaf-in-one-ear male counselor, George (Zander Eckhouse), is good at sports but diffident and shy instead of more predictably macho. The female athletic director wears sports bras and tight-fitting capris that show off her muscly frame, but her enthusiasm for games is played way over the top. She shrieks her encouragement with such vigor, George could soon be deaf in both ears. And even Dr. Rand, who’s supposed to be in charge, mostly wrings her hands, evidence of her own anxiety about doing the right thing.

Camp, in other words, is full of imperfect people, regardless of their weight. The producers take care not to make fun of them, but to instead encourage empathy among them and from spectators toward the characters. They also differentiate empathy from pity, careful to clarify that nothing is necessarily out of these kids’ reach because of their weight. The move to lose is mostly about health.

The show’s web site includes this admonishment to viewers:

At ABC Family, we believe that healthy living means living life to the fullest. In order to live your best life, it’s important to take care of yourself — physically, mentally and emotionally. Here you’ll be given tips on how to eat nutritious snacks and meals, add exercise into your busy life, and build a stronger, more positive sense of self — because living a healthy life means having healthy self-esteem too!

Ask The Panel Huge questions and get Huge answers as they share with you important information about health and provide you with ways you can get healthy today! Reach out to our self-esteem specialist and discover how to appreciate yourself even more!

Love Huge, Think Huge, Act Huge. Whatever you do, do it to the fullest – LIVE HUGE!

Cool message, one that also runs between commercials when the show is broadcast. “Healthy living” is code for “losing weight”; will Huge never be mistaken as an infomercial for fat liberation. Nonetheless, the effort to program for kids in ways that might offer them agency and more reasonable role models to emulate around body image can’t be bad.

I worry, though, about how Huge already psychologizes weight as a result of family dysfunction. For example, a camper who’s good at sports lives with his father, since his mother died when he was young. But when he’s lonely and sad, he writes her letters about how much he misses her, since he and his father only communicate about teams and statistics. Will’s parents seem to disapprove of everything Will does, which heightens the alienation her weight could be meant to manifest. Ian says his parents don’t get along. The alpha girl, Amber, lives alone with a mother who seems oppressively co-dependent on her daughter.

Only the quickly departed camper who suffers from panic attacks has supportive, warm parents. They even adopt Will in their short time at camp, encouraging her to play basketball until she realizes to her surprise that she likes the game. That these parents are overweight, too, suggests that feeling good about yourself despite your body might be the healthiest option.

I worry, too, over Will’s quick concern that she’s been mistaken for “queer” when Ian implies he thinks she is. Becca is uncomfortable with the idea that Will could be queer, and says she’s never met any lesbians her own age (although the easy way she says “lesbians” belies her discomfort). Becca vindicates them both by quickly announcing to Ian that Will is straight and the issue is dropped. But fishing out a lavender herring this early in the series to reassure viewers that Will might be fat and feminist but she’s a normal heterosexual seems cheap.

I also worry that Amber, the one character who’s already heading toward a romance with the hard-of-hearing counselor, George, is the thinnest girl at camp. Played by Hayley Hasselhoff, daughter of David, who was a plus-size teen model before she turned to acting, Amber is beautiful and even a bit soulful, but at least 50 pounds lighter than the other girls. Against the prevailing effort of the show, her character telegraphs that thinness and beauty do bring rewards.

Still, Huge has potential as a summer series. Blonsky is terrific as Will. Proud of her weight and her intellect, full of sarcastic comebacks but vulnerable underneath, as observant about the other kids as she is about herself, Blonsky plays the character with subtle understatement and a healthy empathy of her own. She’s not afraid to make Will loud, aggressive, hostile, and unappealing. She’s also able to temper Will’s anger without making the character appear to capitulate or sell-out her own firm beliefs. Blonsky’s intelligence as an actor reads powerfully on television. Her performance alone is enough reason to check in on Huge.