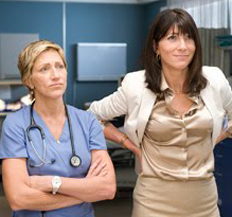 The second season of this Showtime series continued to showcase the remarkable talents of Edie Falco and a terrific supporting cast. Writer/producers Linda Wallem and Liz Brixius (who are themselves recovering addicts) risk putting together a story based on the trials and tribulations of a drug addict who also happens to be extremely smart and competent at her job, if not quite so effective with her family. All these episodes into the story, we still don’t know the root of Jackie’s addiction, or for that matter, her unhappiness.

Because truth be told, Jackie never really seems that unhappy. Her husband is handsome and sweet, a much more maternal figure than she is, who manages their household with aplomb and sometimes grace. Her on-again off-again affair with Eddie, the pharmacist, seems sincere, just when you think she’s only using him for his access to drugs. Which maybe she is; one of the more compelling aspects of Nurse Jackie is that we never hear Jackie’s internal monologue.

We occasionally see her look at herself in a mirror (the show’s opening credits roll over a slow-motion scene of Jackie’s pleasant relationship with her medicine cabinet), but she never seems to appraise herself honestly. Something in her gaze laughs off the implications of what she’s doing (which is usually snorting up a line of powder or pills poured from a capsule she’s broken open). Falco plays her almost mischievously, as though part of the addiction game, for Jackie, is that she can manage to maintain it without getting caught by anyone else or even admitting it to herself. All her intelligence goes toward maintaining the ruse of her competent life.

That basic lie compromises all of Jackie’s relationships, but Wallem and Brixius don’t judge the character. Part of what makes Jackie compelling is how she juggles the contradiction between the self she presents to her colleagues and friends and the secrets she hides.

This season, a few cracks started to appear in the façade of her sangfroid. On a vacation with her husband, Kevin (Dominic Fumusa), and her daughters, Jackie loses the stash she’s brought with her in a nicely camouflaging dental floss container , and quickly finds an excuse to take her family home. The conditions for returning are reasonable (and since this is a comedy series, funny)—they’ve wound up in a B&B that represents the worst of the category, with a proprietor who’s immediately in their business and a room that barely contains the four of them.

Situations always conspire to hide Jackie’s need. In this case, it’s easy for her to suggest that a stay-cation will be better for all of them, and Kevin promptly loads them up and heads home. But that scene is one of the series’ first indications that Jackie can’t do without, that the drugs she collects and enjoys are more necessary than recreational.

Other cracks in her façade appeared this season in her hysteric daughter Grace’s neurotic symptoms. The poor kid’s anxiety rides so high she’s losing her hair. Grace is painfully serious, mortally concerned with ravages to the environment and her potentially short future. Grace manifests physically and emotionally everything that Jackie hides. Jackie refuses to think about the consequences of her double life; Grace thinks too deeply about a childhood that should be much more carefree.

Jackie refuses to see danger anywhere, believing she’s somehow impervious to reality and what it might inflict. Grace can barely leave her room without being hurt or affected on some somatic or spiritual level by the pain that seems to exude from every corner of her life. Jackie can’t help Grace; she’s like an alien creature who feels everything, while Jackie resolutely feels nothing.

The wonderful Elizabeth Marvel plays the mother of Grace’s friend as an insufferably perfect supervisor of her daughter’s life. But Jackie simply refuses to be the model mother. In fact, her drug use seems in part about protesting or resisting all the conventional roles that are rightfully hers—friend, lover, wife, mother—rejecting them for a life lived behind the rose-colored glasses provided by those pretty red and white pills.

Only Eddie (Paul Schulze) has an inkling of what’s up. The series’ first season ended with him uncovering the truth of Jackie’s double-life, and this season, he insinuated himself into her family by befriending Kevin across his bar in Queens. As Kevin and Eddie become good friends, we realize how isolated and lonely Kevin is in his househusband/barkeep role. But Jackie’s lives converge in uncomfortable ways that begin to complicate the simple solid line she draws between the hospital and home.

Eddie becomes a bit snarky this season, since he knows one of Jackie’s secrets and uses it to exercise power over her. The situation lets the writers show Jackie sweating.She’s furious with Eddie for infiltrating her life, but quickly accommodates to the power he holds and changes her tactics. She keeps Eddie in line by baiting him with the possibility of returning to their relationship, although he retains the upper hand, since Kevin has come to like and trust him as his friend.

Jackie’s relationship with Dr. O’Hara (Eve Best) also takes a hit this season, becoming more complex and layered as the writers flesh out Best’s character. Their friendship has always been odd—would a wealthy doctor really be BFFs with a nurse from Queens? Would they really lunch in fancy restaurants, and become so close that O’Hara would want to pay for Jackie’s kids’ education?

The plot point stretches believability, and yet as played by Falco and Best, the women’s compatibility comes from their wry, even mordant sense of their absurd situations, if not the sum of their lives. Their respect for one another stems from how good they are at what they do, and from being women in a professional environment that privileges men.

Anna Deavere Smith, as Gloria Akalitus, was given a larger role this season, which allowed her character, too, to illustrate women’s plight in a male-dominated world.While Akalitus still carries much of the show’s comedy, patrolling her ER like a bomb-sniffing dog, looking for rule infractions and inappropriate behavior along with cost-cutting possibilities, this season clarified that Gloria also has a real heart. She and Jackie understood one another on a deeper level, and Gloria learned how to manage the huge and unwieldy ego that is Dr. Cooper (“Coop,” wonderfully played by Peter Facinelli).

One of Nurse Jackie’s central pleasures is the buffoonery of its leading male character. Utterly self-centered and entirely arrogant, Coop expects the staff to kow-tow to his position just because he’s male and a doctor, surrounded by nurses who are mostly women and gay men. Enamored of his own good looks, Coop pays to extend the ad campaign that featured him as the face of All Saints Hospital, unable to tolerate not seeing himself on billboards and bus shelters around the city.

In the second season’s finale, Coop beds the free-spirited girlfriend of the recovering addict male nurse, Sam (Arjun Gupta), prompting the poor guy to fall off the wagon and to land his fist on Coop’s nose. Crushed that his face has been compromised, Coop goes crying to O’Hara and Jackie, while Sam gets completely bombed, forcing Jackie to reveal that she knows all the tricks for quickly returning someone to sobriety.

The writers temper Coop’s insufferable ego-centricism by making his character as full of contradictions as Jackie’s. He’s the child of two mothers, raised by lesbians yet still flaunting his male privilege and cluelessness about what it means to be “othered.”Occasionally, he uses his provenance to try to establish liberal credentials, but it never quite sticks, as Coop has too much fun surfing through life on the wave of his whiteness and his maleness.

His absurd and occasional attempts to make common cause are only excuses for comedy. For example, when Harvey Fierstein guest stars as a gay man (no surprise) whose partner is dying, Coop makes sure to let him know that his mothers are lesbians. That Fierstein and most other characters respond with indifference is a neat commentary on how an unconventional background no long automatically makes you empathetic or even interesting.

Coop’s tic—when he’s stressed, he grabs women’s breasts and won’t let go—is hysterical in both senses of the word. It provides terrific opportunities for his acting partners (especially Merritt Wever, as apprenticing nurse Zoey) to react comically and it’s a very funny psychological manifestation of his inability to crawl out of the womb.Even though Coop’s mothers made a guest appearance in Season One, we learn little else about Coop’s life outside of All Saints.

We really don’t know anyone’s back-story on Nurse Jackie. The appearance this season of O’Hara’s sometimes girlfriend—a television journalist played by the beautiful, perky Julia Ormond—revealed that she’s bisexual. In one episode over that story arc, O’Hara and Sam have a quickie in the hospital chapel. As their breathing starts getting hot and heavy, Sam admits he has a girlfriend and O’Hara retorts, “So do I.”

Although her relationship with the girl reporter doesn’t work out, O’Hara’s lesbian proclivities add nuance and texture to a character who’s already an unusual take on what it means to be a woman doctor. Proudly rich, decked out in catch-me-fuck-me heels and designer clothing under her white lab coat, O’Hara is supremely competent and unruffled.

Yet all we know about her outside of her professional life is that she won’t tolerate a girlfriend who cheats and that money is no object. When she and Jackie share a moment, after it’s clear O’Hara’s affair has ended, Jackie admits that she likes being O’Hara’s “girl.” O’Hara confesses that Jackie is the only reason she looks forward to coming to work every day. Odd couple though they might be, Jackie and the doctor are in many ways the show’s central pair, the Meredith and McDreamy of All Saints.

Nurse Jackie, thankfully, isn’t Grey’s Anatomy. While on Grey’s, the staff’s work is a thinly veiled excuse for muddling in their personal melodramas, Nurse Jackie is more interested in how our work becomes our lives. Although Nurse Jackie’s writers say their show is really about addiction, it’s also about how our work is so central, it’s easy to split off professional personae from domestic selves.

Jackie’s best self patrols the floor of All Saints, where she delights in bending rules and advocating for people who have little power over controlling institutions. She might be unethical, but her choices are always for the good, and always make the right kind of difference.

That her personal life is morally suspect casts a pallor on her character’s righteousness, but it’s also realistic and somehow true. No one is perfect. Without her flaws, Jackie would seem a larger-than-life crusader. Instead, she fights the good fight with one hand and puts dope up her nose with the other. Despite the hospital’s name, no one is a saint—or perhaps, on the contrary, we all are, warts and all.

4 thoughts on “Edie Falco and Eve Best on Nurse Jackie”