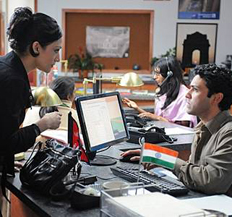 The Good Wife finishes out the season next week with a finale that promises to launch Peter Florrick (Chris Noth) back into the center of corrupt Chicago power, while Alicia (Julianna Margulies), his very good wife indeed, suffers her own moral turmoil over using her husband’s connections to bring clients to her money-hemorrhaging law firm, Stern, Lockhart, and Gardner, where she’s just secured her future as a junior associate.With Margulies in the lead, and the still terrific Archie Punjabi refining her role as Kalinda, the ace investigator with a rather mysterious personal back-story, The Good Wife continues to offer one of television’s more captivating representations of a middle-aged woman with complicated desires and a real job at which she excels.

The series does a good job exploring, from women’s perspectives, the murky ethical complications of the law and politics (personal and public). Peter Florrick serves as the anchoring amoral, self-serving, grandly ambitious politician and Alicia as his morally righteous counterweight, but the series increasing muddies the waters of Alicia’s purity, placing her in situations that clarify how difficult it is to keep your hands clean, especially when they’re in close proximity to money and power.

In her competition with the Boy Wonder, Cary (Matt Czuchry) for the single junior associate position Stern, Lockhart, and Gardner can afford, for instance, the writers show the cut-throat young white boy overtly campaigning among the other associates, talking Alicia down (she’s too old, too female, and too soft for a tough man’s job, he says) among the sinks and urinals of the firm’s men’s room. But if Cary’s ambition follows the well established capillaries of the good ole boys’ network, Alicia’s bid for the firm’s favor takes her into even murkier territory, in which trading favors with her husband’s handler, Eli Gold (played with subtle and controlled irony and wit by an increasingly appealing Alan Cummings), lands her clients that make her invaluable to the senior partners.

When Cary fails to get the nod for the permanent position, all of his erstwhile good will toward Alicia evaporates, leaving him only with the white male privilege and entitlement that he held in good-natured check while he worked alongside her. Pale with anger at his dismissal from the firm, he accuses Alicia of using her personal connections to advance her cause. And although Cary’s return to always available sexism and ageism makes the once likable character instantly appalling, it’s hard to say he’s wrong. Alicia has indeed finally used her proximity to Peter in ways she resisted throughout the season, now sliding along the slippery slope of political machinations she used to view with clear distaste.

In a demonstration of the power of the new girls’ network, in fact, it’s Diane Lockhart (Christine Baranski), one of the two chief partners at Stern, Lockhart, and Gardner, who encourages Alicia to mine Peter’s connections to prove her usefulness to the firm. Alicia, the theoretically good wife, has insisted on holding herself aloof from Peter’s problems and the possibilities his connections present, as though she’s not already dirty by association. When she capitulates to Diane’s suggestion, Alicia doesn’t even seem to suffer ethical qualms. Eli Gold’s 11th hour support allows Alicia to keep her job at the firm.

What seems in question as the season finale approaches is whether or not Alicia really can maintain her role as the good wife. Peter’s mother, who’s provided the conservative counterpart to Alicia’s modern, even feminist working mom throughout the season, keeps reminding her daughter-in-law that to be a good wife means to support your husband regardless of your own feelings or ideas. As soon as Peter’s electronic monitoring device is removed, securing his full personal and political freedom, he returns to his influence-mongering, wheeling and dealing ways, glad-handing the powerful who’ve gathered at his home to congratulate him, as his wife, son, and daughter watch from a distance, wondering whether or not they’re glad that he’s back in their lives without restrictions.

When Peter beckons to Alicia to join him at the party, she hesitates, and then walks slowly into his orbit, where he introduces her to two authoritative white men looking for a new law firm, whom he says are from the AFL-CIO. The episode ends on a shot of Alicia grasping hands with one of these gentlemen, symbolically underlining her own willingness to get her hands dirty, and Peter’s willingness to buy her personal loyalty with his political connections.

Unfortunately, while she proves herself more than capable professionally every week, Alicia’s competency as a lawyer gets muddled by her attraction to her boss, Will (Josh Charles), whom she knew in law school and who took a risk by giving her the job when Peter went to prison. The Good Wife would be so much more interesting if it avoided the romantic angle all together, instead of letting snarky Cary be half right when he accuses Alicia of benefiting from the sexual energy between her and Will. The couple’s as yet unconsummated affair is only interesting because Alicia uses it to lord some power over Peter, who’s astonished that Alicia won’t simply forgive his own entirely public sexual peccadilloes and return happily to his bed. Watching Alicia flaunt her sexual independence from Peter has been one of the season’s pleasures.In last night’s episode (#22, “Hybristophilia”), Kalinda insists Alicia celebrate keeping her job as a junior associate by taking her out for multiple shots of liquor. As the two women get increasingly drunk, Alicia asks Kalinda point-blank if she’s “gay” (why can’t anyone on television say the word “lesbian”?). The juicy moment makes textual what the series has hinted at but never verified. Kalinda’s had her share of electric moments with women, who flirt with her and sometimes even try to seduce her. But we’ve also seen Kalinda trading sexual favors with a local detective to get important information relevant to her cases. Is Kalinda a lesbian, or just a woman willing to use any means possible to get what she needs? And does that make her ethically suspect? Or less powerful and full of what often looks like feminist agency?Kalinda dodges Alicia’s question at the bar, coyly insisting she likes to keep her own life private and that her sexual preference doesn’t really matter. And it doesn’t—Kalinda remains sexy and alluring probably for spectators across gender, because of the character’s cheeky brilliance and Punjabi’s charisma (and, okay, her body). It’s fun to speculate about for which team she bats, but it doesn’t really matter, to the plot or to the pleasure of watching the character operate.

Is this the season of incidental lesbianism on television? The L Word is no longer on Showtime, but it seems every time I watch something, another lesbian couple or reference pops up. I’m no longer a fan of Grey’s Anatomy, but flipping through the channels a week or so ago, I wound up catching an episode in which Callie (Sara Ramirez) openly flirts with a female patient at the hospital, who’s forward enough to write her phone number on Callie’s palm. In the same episode, Callie breaks up with her girlfriend, Arizona (Jessica Capshaw), because Callie wants to have a baby and Arizona doesn’t. And mind you, this wasn’t an episode about lesbians; this was just part of the on-going story of two of the show’s recurring, central characters.

And on Showtime’s Nurse Jackie, which I do watch and enjoy regularly, Dr. O’Hara (the inimitable Eve Best) turns out to have had an on-again, off-again relationship with a woman, Sarah Khouri (Julia Ormond), a famous television journalist. Although the story arc is brief, it begins when Dr. O’Hara has a quickie with the too-sober All Saints nurse, Sam (Arjun Gupta), who protests, as they begin kissing frantically, that he has a girlfriend, to which Dr. O’Hara responds, “So do I.” When O’Hara’s relationship with the tv reporter sours, Jackie, who’s been something of an eager, willing witness to the two women’s affair, tells O’Hara she never really liked Sarah, and that she prefers being O’Hara’s “girl.”

Finding lesbian feelings, relationships, or characters peppered across the television spectrum still seems to me a wondrous thing. When I’m feeling optimistic, I have to think it signals an opening of options for women, representations of new choices we might make for ourselves as not just sexual beings, but as people who want certain kinds of relationships, and professions, and families, which may or may not be conventional, regardless of the gender of our partners.

And that’s a good thing.