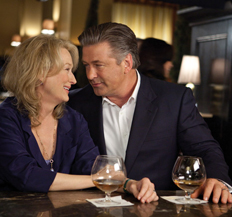 In writer-director Nancy Meyers’ latest ode to the empowered, later-middle-aged woman, Jane (Meryl Streep) is placed in the supposedly happy position of being a post-menopausal divorcée suddenly sought after by two men, one of whom happens to be Jake, the husband who left her 10 years earlier. Played by Alex Baldwin as a handsome if portly lawyer enamored of his own power and success, Jake left Jane for a younger woman, Agness [sic] (Lake Bell), who’s lithe, gorgeous, and cold. Instead of finding himself languishing in erotic bliss, Jake’s new life has thrown him back into the domestic turmoil with which he probably thought he’d finished.

Jake and Jane have three grown children, who still grieve their parents’ separation, even though the oldest is now getting married herself. Her marriage creates situations that contrive to bring Jane and Jake back together. In scenes filled with talented actors speaking terrible dialogue and trying to justify unbelievable circumstances, the Jake-Jane brood flutters around like little ducklings that lost their mother, even though it’s their father who left. Happily, Meyers doesn’t capitulate to the family reunification fantasy that provides the kids’ only function in the film. Instead, Meyers is too busy focusing on the liberating sexual dalliances that make Jane newly a-glow with the vitality she apparently lacked when there was no man in her life.

Jake tussles with Agness’s young son from a prior marriage, a little brat who’s meanly suspicious of Jake, and doesn’t trust his place in his mother’s affections. Agness doesn’t trust Jake’s ability to provide the sperm that seems her only reason for marrying him. In Meyers’s cosmology, adulterous husbands who flee long-term marriages with age-appropriate wives for younger women still in their baby-making prime costs these men; the price is being forced back into fatherhood in their own late-middle-age. That Jake can’t produce enough swimmers to get his new wife pregnant irritates her and humiliates and annoys him.

Part of Meyers’s mission is to even out the gender trouble between heterosexual men and women in this supposedly post-feminist moment. In It’s Complicated, leveling the gendered playing field means that in one scene, Jane’s daughter’s fiancé, Harley (a charming John Krasinski) appears in the family kitchen in the morning in his wife’s feminine pajamas, explaining sheepishly that he was cold during the night. Gender equality also means that while Jane fans herself and blows down her shirt to mitigate the effects of her hot flashes, Jake passes out right before they have sex from the effects of a drug that keeps him from urinating constantly.

On the other hand, “empowerment,” in Meyers’s fantasy for upper-middle-class white women, means professional success—Jane owns a popular bakery/café—but most importantly, a satisfying sex life. In one of the film’s most appalling scenes, Jane and her friends, all played by talented actors like Mary Kay Place and Rita Wilson, both wasted here, bemoan Jane’s reluctant celibacy. They actually imply that without sex, her body will dry up and blow away. The scene is played for adolescent humor, but its implications aren’t funny. I applaud Meyers’s insistence that middle-aged women can still be sexual. But her film implies that if they’re not having sex, they’ve failed.

So, naturally, the film proceeds to be all about sex. Her daughter’s pending marriage throws Jane in close proximity to her ex, and because he’s unhappy in his new marriage, he becomes sentimental about his old one. It’s Complicated is wish fulfillment for the jilted woman, in which the husband who dumped her comes groveling back, giving her the power to choose whether she wants him or not.

To flatter Jane’s sex appeal further, and to make her choice that much more complicated (at least theoretically, since Meyers telegraphs from the beginning that going back to Jake would be a bad idea), Meyers invents another suitor for our heroine. Steve Martin plays Adam, the architect who comes to design Jane’s utterly unnecessary new kitchen (the old one is already a model of modern conveniences and domestic aesthetics). Adam is still recovering from his own divorce, in which his wife dumped him. Two years later, he’s still gun-shy and uncertain.

Adam is everything Jake isn’t—he’s feminine to Jake’s alpha-maleness; he’s quiet and reserved, where Jake is boisterous and vivid; and he’s a politically correct, shy, and tender, while Jake is a wild and crazy guy (allusion intended). As a result, Jane gets to decide not only whether she wants a man in her life, but which kind.

Part of the fantasy Meyers creates with such relish is that Jane and Jake not only rekindle their relationship, but have fantastic sex in the process. As they undress, Jake wants to see her naked, suddenly waxing sentimental about the woman with whom he didn’t want to grow old. He’d now rather admire Jane’s non-reproductive body than be the sperm-bearer for Agness’s taut, fruit-bearing womb. Jake is nostalgic for a woman who will let him rest in his past without needing him to procreate her own future.

While Jane is attracted to her husband’s reunification dream, Adam’s utter difference from Jake also appeals. Adam is a soft-spoken, intellectual creative type, while Jake is a bull in a china shop. Meyers literalizes that metaphor in a scene in which Jake decides to surprise Jane by turning up naked in her bed while she’s in her bathroom getting ready to go to sleep. Jake strips and happily hops on top of the covers, arranging Jane’s open laptop over his, well, lap. He doesn’t realize that Jane and Adam have been Skyping—talking to one another through their computers—which lets them see each other through their laptops’ webcams. By covering his manhood with the computer screen, he inadvertently gives Adam a close-up for which the buttoned-down architect isn’t prepared.

Martin performs a comically revolted reaction to Jake’s penis writ large on his laptop screen, which sends the audience into gales of laughter. But there’s something vaguely distasteful about the scene, not the least of which is that the sight gag is so obvious and predictable. Adam’s huge over-reaction at suddenly seeing another man’s penis reads as kind of homophobic. His out-sized distaste seems too much misplaced protest. The scene’s cache comes from Jane and Adam’s too-twee attempt to be tech-savvy by flirting on Skype, but Meyers plays the somehow old-fashioned penis joke at Adam’s expense. And it’s hard to feel sympathy for him because the character is such a, well, pussy.

The script yields no surprises. Jane lets herself trust Jake again, and agrees to a date at her house for which she makes a gourmet, romantic meal. Of course, she sits alone watching the clock when he fails to show up. We see her sadly packing the food away (her children eat it later, surprised that “it’s Dad’s favorite meal!”), all because Jake couldn’t shake the evening free from his young family. The moment is standard in rom-com fare. Likewise, after Adam is treated to the close-up of Jake’s anatomy, his trust in Jane falters. While it’s nice to see the woman reassuring the man that she won’t hurt him like his ex-wife did, it’s still an utterly predictable plot line in conventional heterosexual relationship narratives.

In addition to boasting a story that telegraphs where it’s going from the start, It’s Complicated is visually flat and uninteresting to watch. Meyers moves her camera from long shots to medium shots to two-shots and back, with nothing to interrupt the monotony except occasional establishing shots of the décor-porn that motivates the movie: the beautiful bakery that Jane happily owns; the home she’s renovating so that she can have the kitchen and the view she always wanted; and the comfortable living room that looks as inhabited as a room in a Pottery Barn catalogue.

But that display of wealth is also part of this fantasy. While outside the movie theatre, the unemployment rate climbs ever higher and the stock market yo-yos, in Meyers’s fantasy land, money is no object, or certainly no cause for anxiety. Everyone is comfortable and successful, even though they don’t seem to work; they just have parties and fly across the country to hang out together in one gorgeous location after another, from the family homestead in Santa Barbara to bustling New York City, both photographed like eye-candy.

Meyers provides nothing for a bunch of good actors to do but stand in front of all the pretty scenery. Terrific Zoe Kazan is cast here as the youngest daughter in a role that doesn’t even begin to take advantage of her talent. The Jane/Jake kids are one long collective reaction shot, and play a single group objective: to get their parents back together. We’re supposed to believe that these adult children are still undone by their parents’ divorce ten years earlier, as though ending a marriage inevitably ruins a family.

Streep is wonderful in her scenes with Baldwin, simultaneously flattered by Jake’s renewed attention, and nostalgic herself for their younger lives. She and Baldwin trade Meyers’s repartée with fluid ease and lightness, not taking too seriously the outlandish situations she writes for them. But at the same time, the actors commit enough to the film’s project that their characters’ reignited relationship seems believable (which is, I’m afraid, the film’s real achievement).

As usual, Streep is lovely, creating a layered, complex character despite a script that provides no help. But although the story is Jane’s to tell, Jake upstages her at almost every turn. Baldwin flaunts his own middle-aged body in all its hairy heaviness, relaxed and matter-of-fact when he gets naked with his ex-wife. Jane, by contrast, is at first unwilling to stand naked in front of him because, she says, a body looks different when it’s upright, when everything “falls.”

While Jane hesitates to exhibit the toll time has taken on her flesh, Jake’s physical aging doesn’t bother him at all. Jake is generous with Jane’s body-shyness, but their scenes together really just underline that men maintain their sexual power even when their bodies begin to decline, while women, in their own eyes and the eyes of most men, emphatically do not. Seeing Jake in all his hirsute glory, you have to wonder what his lissome young wife sees in him.

Only Streep’s presence makes It’s Complicated slightly more than a middle-aged woman’s revenge fantasy in which the philandering husband gets his comeuppance. In her hands, Jane is a late-middle-aged woman with agency, and her delight in a situation that seems unrealistic even to her makes watching her escapades entertaining. Streep’s wink and nod to the viewer asks us to just go with this insanity, as she’s clearly chosen to do. She asks us to indulge the idea that middle-aged wealthy women can indeed resurrect themselves as sexual and desirable, despite all cultural interdictions and predictions to the contrary.

What’s the moral of the story here? According to Meyers, Jane’s rather shrewish friends were right. They tell her at the beginning of the story that if she doesn’t have sex, her vagina will close up and that her labial lips will grow back together. They tell her that she needs semen to be stimulated—even, in their overstatement, to be kept alive—and indeed, even the cooks in her bakery comment on her “glow” after Jane begins her affair with Jake. In the scenes in which Jane reports her escapades to her friends and seeks their advice, the women act and speak like teenagers instead of mature 50- or 60-somethings who might help one another see their lives through a different set of values, rather than whether they have boyfriends or not.

But this is Nancy Meyers’s land, and in the world she creates, absolutely the only thing that’s really complicated is getting Jane that view of the ocean from her house’s new addition. Would that everyone had such problems.