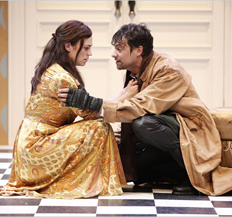 Or, (spelled with the punctuation intact as Or,), the recently-closed first production of the 2009-2010 season at the Women’s Project, is a delightful romp. Based on the life of Aphra Behn, Liz Duffy Adams’s lively, contemporary interpretation is full of highly theatrical devices and whimsical plot turns. The production, directed with fluid energy by Wendy McClellan, boasts three of the most appealing performances I’ve seen all year.

Behn was the English Restoration playwright known for writing bawdy comedies in the style of her 1660 moment, who also had a double life as a spy (code name “Astrea”) for the Empire. She was one of the first women to write publicly for the stage.

In a prologue typical of Restoration comedy, addressed directly to Or,’s audience, actor Kelly Hutchinson stands by a ghost light center stage and speaks to spectators as herself. She describes how the play we’re about to see will straddle different moments in history—from 1660 to 1960 to “now”—and brook utter disregard for binaries like male and female, gay and straight, night and day, and other common terms and ideas typically held in opposition. Hutchinson’s costume mixes historical and modern dress, and her speech, although in verse, is entirely contemporary and colloquial.

After her warm greeting, Hutchinson disappears with the ghost light to reveal a simple set: a 1660s-style writing table and chair down stage right; a multi-purpose ottoman and wardrobe stage left, both of which assume various uses throughout the production; and a requisite double door center stage, through which the two supporting principles (Hutchinson and Gian Murray Gianino—who replaced Andy Paris—both of whom masterfully cycle through multiple roles) come and go in their various guises (and disguises).

Aphra Behn, the lady of the hour, settles in at her desk with familiarity, ease, and a voracious need to write, delighted to be in the chair to which she obviously loves to retire. Played with charm, wit, and a flirtatious intelligence by Maggie Siff (of tv’s Mad Men), Or,’s Behn is a portrait of a woman defined by her work, who’s never happier than when she has a pen in her hand.

Adams’s portrait of the artist as a dedicated woman scribe underlines Behn’s historical status as a forgotten woman playwright recovered by scholars during second wave U.S. feminism in the mid-70s and 80s. Behn’s play, The Rover, in fact, has been parsed by feminist performance scholars like Elin Diamond for the ways in which it both hews to and pushes against the conventions of the form. In Or, Behn is a firecracker, sexually adventurous and open, confined to her boudoir by a society that can’t quite fathom the conjunction of “woman” and “writer,” terms usually kept apart by the conjunction that names the play.

Behn’s magnetism draws people to her. In Or, she’s approached to satisfy the emotional and physical whims of both King Charles II, who visits her at first disguised, to suggest a liaison, and then by Nell Gwynne, the actor known for her wit and style as an performer on the Restoration stage, as well as for her role as mistress to the King. Adams fancies Gwynne as a happily bisexual woman who makes love to Behn and later shares her bed with the King, whom Behn offers her with the magnanimity of someone who can take or leave the mechanics of heterosexual sex.

The trio’s polymorphously perverse ménage a trios is set, in the end, against the psychedelic backdrop of a scrim painted like a Peter Max poster, with a rich splash of primary and pastel colors drawn in the rounded cartoon-style hand of the 1960s black-light posters under which people listened to Pink Floyd and smoked weed.

The characters speak in a wonderful mash-up of idioms from 1660s blank verse, to 1960s colloquialisms, to contemporary references to, for example, a faltering economy, while their clothing quotes the style and cut of Restoration cloth. The King first presents himself to Behn as a kind of bandit, wearing a black velvet half-mask through which his eyes roll and roam with comic precision. His black cape and velveteen rounded hat make him appear aristocratic against Behn’s simple white dress, with its gathered bodice and soft folds. Nell Gwynne, on the other hand, wears functional breeches and a loose white shirt, the flowing costume of a free-spirited artist comfortable with her body from within and without, watching herself as she is accustomed to being watched by others.

Part of the fun of Or, is how quickly these characters hook up (as their liaisons would now be called). After quick exchanges of pleasantries, Charles and Gwynne both profess their love for and attraction to Behn, who requites both of them with easy amusement. Both her suitors kiss her, caress her, and hold her, attention to which she submits until her desk and her quill pen call her back to her work. In fact, Behn demonstrations through her actions that her work holds more allure than sex.

Invited through the door in the upstage center of the set to come to bed with either partner, Behn is willing, but not until she scribbles one more line or two on her sheaf of parchment paper. Her suitors wait, happily. In this idyllic world, there’s no end to desire and lust, but it’s matter-of-fact rather than urgent, and always concedes to Behn’s need to work. Or, as a result, becomes a play about a woman with agency, who writes her life as she lives it (and likewise lives what she writes).

The two supporting actors rotate through multiple roles in short order, providing much of the production’s comedy. Hutchinson primarily plays Gwynne, but also appears as Maria, the trusty and crusty servant, for which Hutchinson adopts a lower-class accent and a stooped posture to deliver the old woman’s pungent observations. Gianino, along with his role as Charles, plays Behn’s ne’er-do-well former consort, William, who arrives at her chambers intent on bilking her of whatever funds to which he can lay claim. Because he has to hide his presence, Will spends a lot of time popping in and out of the wardrobe, which gives Gianino time to make the quick changes that allow the actor to reappear almost instantly on the other side of the stage as the King. Only the occasionally awry hairpiece indicates the arduous transitions made backstage

Gianino accomplishes the character transformations in a style made famous by Charles Ludlam and his Ridiculous Theatre, comic methods for multiple role-playing popularized in his much-produced The Mystery of Irma Vep. A fake arm in the wardrobe, for instance, makes it seem as though William is still in there as Charles woos Behn by her desk. Gianino also offers a funny turn as a theatre-company-owning dowager, Lady Davenant, wearing a towering wig and a complicated, layered pink dress that can’t quite disguise his height or his manly mass. Gianino’s quite game to distinguish among his characters’ genders and sexual overtones, so that each one he plays maintains their own kind of dignity, even as the costume of the other peaks out from beneath the hem of his dress.

The 90-minute Or, is an evening of good fun written with such wit and charm and played with such good humor and good faith that the production is irresistible. As the lovers form themselves into a happy ménage-a-trois, the stage fills with good will and the attractions of relationships built on fellowship and mutual attraction. Despite what we know of the 1960s sexual revolution, in which men were much more liberated by revolving partners and sexual licentiousness than women, in Adams’s version, Behn is the fulcrum of the trio, and the women are full of agency, desire, choice, and affection, and as sexually and emotionally fulfilled as the men.

McClellan moves the production along with ease and verve, so that although the action plays out on one simple set, it seems as though the characters are always moving along, that something momentous is always happening. Her direction exemplifies the play’s overlapping time frames—she moves us across time and space imaginatively and effortlessly, keeping the energy and spirits high. One moment, we seem squarely in the 1660s; in the next, Janis Joplin’s electric wail covers a scene break, and we’re recalled to the 1960s. The music, in fact, gilds the production with nostalgia and pleasure.

Siff gives a lovely, specific and grounded performance as Behn. She winks at the audience, bringing us along with the play’s jokes and fun. She scribbles happily at her work, bent over her desk with as much pleasure as she derives from her suitors’ kisses.All three performers, directed by McClellan with perfect pace, pitch, and possession, look like they’re having a great deal of infectious fun. The three share their happy kisses, forming the gestus of love without that dread conjunction “or.”

In its happy time-confusing world of 1660/1960/now that Duffy Adams creates with such pleasure, Or, is a play that’s ultimately about both/and.

2 thoughts on “Or, at the Women’s Project”