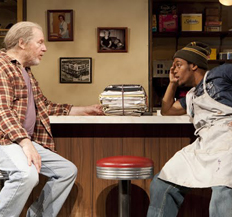 I wasn’t a fan of Tracy Letts’s popular, Tony Award-winning August: Osage County, and his sophomore Broadway outing, Superior Donuts, has both more and less to offer. Crispy directed by Tina Landau, acted with empathy and precision, and designed with evocative realism (down to the chewing gum pressed underneath the donut shop tables and counter), the play is a squarely conventional story told without much theatrical innovation. Letts’s women characters aren’t the shrewish matriarchs of Osage, but neither are they three-dimensional people with the emotional heft and attractions of the two leading men.

Arthur Przybyszewski (Michael McKean), who owns the donut shop in which the play takes place, arrives one morning which should be like any of the many others he’s spent in the place over his 50+ years to find the glass front door shattered and “PUSSY” written in dripping red paint across the wall behind the counter. Although the beat police who frequent Superior Donuts are on the scene even before Arthur, it becomes quickly clear that the crime has been perpetrated by a disgruntled former employee whom we never see. Instead, in the lightly comic banter that establishes both character and plot, the break-in provides the occasion for defining the racial politics of the neighborhood.

At this moment, apparently Russians, Polish people, and African Americans vie for social dominance in Chicago’s Uptown. Max Tarasov (Yasen Peyankov), the brusque, entrepreneurial, heavily accented middle-age Russian man who aggressively bids to buy the donut shop, automatically suspects the “black hoodlums” he sees as the root of the neighborhood’s decline. With each racial slur he pronounces in his comically mistaken syntax, he adds, “You should excuse the expression,” so that he won’t offend Officer James Bailey (James Vincent Meredith), the African American patrolman who examines the scene with his partner, Officer Randy Osteeen (Kate Buddeke). Bailey’s eye-rolls become increasingly pronounced as Max’s diatribe intensifies, until finally, he’s required to intimidate Max physically to get him to stop talking.

Their exchanges are funny in a pat, liberal, “isn’t race a bitch?” sort of way. But Max’s suspicions about the neighborhood’s “obvious,” “natural” criminals is allowed to stand, even when Letts establishes that the (presumably white) ex-employee broke down Arthur’s door and slurred his name. Max finally leaves, and James mutters something about Russians and Polish people being what’s wrong with the neighborhood. The supposedly affectionate tit-for-tat racism is supposed to defuse any lingering ill-will. But instead, that opening exchange actually haunts the story, as Arthur cautiously establishes a relationship with Franco Wicks (Jon Michael Hill), a young African American man who turns up looking for a job.

Arthur is an aging Hippy who’s stuck in the rut of making and selling donuts out of a shop his father founded a generation before him. In stilted monologues lit only by a strangely out of place white follow spot, Arthur periodically tells the audience about his life to date: his divorce, necessitated by Arthur’s inability to communicate emotionally or to shake off his taciturn nature; the loss of his daughter in the bargain, who drives off with his wife at 13-years-of-age and whom Arthur still hasn’t seen six years later; and his failure to meet his father’s expectations of what it means to be a man, since when he’s drafted, Arthur dodged his patriotic duty by leaving for Canada instead of serving his country as his father expected.

A generous reading would find Superior Donuts a warm, wistful, and wry investigation into white liberal masculinity, when the ideals of the 60s have long given way to new, less noble values. Arthur still wears Grateful Dead t-shirts, for which Franco teases him mercilessly, and his hair is pulled back a long gray pony-tail that doesn’t flatter his face or his figure (Franco quips that pony tails are for little girls and ponies). He’s immobilized in his life, unable to move forward or back, caught by the spotlight’s white glare in old family narratives that he can’t fix or escape.

Franco’s appearance begins to shake up Arthur’s hopeless, frozen complacency. Played by Hill with deft comic timing, fresh emotional openness, and a physical ease that fills the stage with the bounce of his spirit, Franco diagnoses Arthur’s problem in one glance and goes on to provide him a happy counter-example. Franco might be broke (the fact that he’s in debt to a loan shark for $16,000 of gambling debt is the plot’s most contrived point), but he’s got ambition and confidence, and easily talks the reluctant Arthur (whom he quickly dubs “Arthur P,” since he can’t pronounce his Polish last name) into hiring him. The men embark on a tentative friendship, with Arthur pulling back as Franco pushes forward, and eventually, vice versa.

Franco’s secret is that he’s written the “great American novel,” a manuscript called America Will Be, after a Langston Hughes poem. The pages of Franco’s book are collected in mismatched notebooks and notepads held together by bungee cords in an unwieldy package that Franco carries in his backpack. As he pulls it out proudly, he announces that this is his only copy, which he hasn’t “put it in a computer or anything.” According to the conventions of theatrical realism, such a remark can only signal that the manuscript isn’t long for this world. The facility (in both senses of the word) of Letts’s writing insures that we know the novel won’t make it to the play’s end; once Arthur reads it and pronounces it good, too much rides on the manuscript as the vehicle of Franco’s deliverance for it to actually fulfill its promise.

Neither man knows how to get the manuscript to people who might be able to publish it, dooming what very well might be Franco’s unique voice to the violent vagaries of the loan sharks (Luther Flynn, played by Robert Maffia, and his henchman Kevin Magee, played by Cliff Chamberlain), who destroy the book when they exact their vengeance for Franco’s unpaid loan.

When, in the second act, Office Bailey tells Arthur that Franco’s been hurt—Luther and his boy cut off three of Franco’s fingers—and his book trashed, the audience the afternoon I saw the play (Saturday, October 17th) gasped collectively. As my theatre-going companion LB Clark asked, what is it about a play like this that can manipulate so many spectators into such a unison response, even when some of us could have written this predictable outcome ourselves?

That collective expression of spectatorial dismay could be because, to Letts’s credit, Superior Donuts has painted Franco as such a winning, likable character, the sudden dead-ending of his dreams through the destruction of his manuscript feels like a real emotional blow. Letts has persuaded us to like Franco, to believe in him and his ability to shift not just his own fortunes, but Arthur’s, too. Under Franco’s quick and cajoling care, Arthur starts to come out of his shell. He teaches Franco how to make the donuts, an implicit act of trust, while Franco teaches Arthur how to ask Randy, the lonely policewoman, out for a date. The boy’s wit and fluidity with language—he speaks in a mixture of hip hop cadences and “plain” English that’s the most lyrical, poetic part of Letts’s play—along with his emotional candor and optimism, begins to pry the lid off Arthur’s reticence.

Played with subtly and grace by Michal McKean, Arthur’s face gradually becomes more mobile, his expressions broader and more open, almost as if we’re watching his features crack open at the start of a long-awaited thaw. McKean’s body begins as a still, lethargic, practically absent presence on stage, and gradually, through his enlivening interactions with Franco, begins to be re-inhabited by a gentle, caring man with a sweet sense of humor and a beguiling manner. He gathers his courage to ask Randy for a date, an invitation that gets her happily out of her masculine police-wear into a frilly flowered dress in which she bustles around behind the counter in the second act, already settling into a wifely domestic role.

But unfortunately, the road to happiness for the play’s white characters is literally paved with the blood of the African American young man. The characters’ business at the top of the second act prepares for Franco’s homecoming after his “accident,” with everyone readying the donut shop as if for a victory party. But when Franco arrives, the once garrulous, sweet-talking young man has been rendered mute. He sports a bulky bandage on his right hand, and his stature seems literally reduced.

Franco barely speaks through the rest of the play. Instead, he cries silently, mourning his newly abridged future as Arthur tries to persuade him that America Will Be can still be, that he still has his story, even if his manuscript has been cruelly destroyed. The play’s end painfully illustrates how American drama still relies on shopworn racial conventions in its plotting. Even in a play that wants to be progressive, as does Superior Donuts, people of color continue to provide the vehicle for white people’s growth and self-discovery instead of their own.

Superior Donuts, as its name suggests, is essentially “culinary,” as Brecht might describe it, in that it provides audiences with an easily digestible evening of racial encounters (in a kind of low-fat cruller sort of way) that lets a white spectator go home satisfied that progress—for them, at least—is possible. The humor Letts employs helps establish that tone. Franco’s first act banter is wise and funny; he makes jokes at Arthur’s expense, but always with affection and respect. For instance, suggesting he remake his appearance, Franco tells Arthur that the Grateful Dead probably doesn’t need a new drummer.

The jokes—which appear to be at the white liberal’s expense—bring easy, even knowing laughs that set up the cheap manipulative pathos that follows. Arthur learns to laugh at himself and his outmoded ways, while Letts also establishes his liberal credentials: Franco lets him read his manuscript only when Arthur proves he can name ten African American poets.

But all of Arthur’s liberal generosity—including the fact that he pays off Franco’s loan—can’t keep the African American young man from being hobbled, physically or psychically. Arthur decides to sell the store to the over-eager Russian Max at the play’s end, which provides him the seed money for his new life. Franco, the articulate, smart, hopeful vehicle of Arthur’s redemption, is left fingerless and jobless, alone without an employer, a friend, or a manuscript.

The performances bring nuance and depth to characters that could too easily be stereotypes, including the loan sharks and the large, non-English speaking Russian who Max brings to intimidate Luther and Kevin. Hill and McKean form a lovely camaraderie, playing off one another with appealing ease, humor, and good-will.

James Schuette’s beautiful set evokes a frozen Chicago winter. Outside the shop’s door and front windows, the audience can see the narrow street, a parked car, a parking meter, and various pedestrians hurrying by as snowflakes occasionally drift down from the flies. The donut shop’s dilapidated state feels real enough that you can practically smell the old fryer oil, the exhaust from which has marked the walls with grime. The masking tape on which Arthur (or his father) has penciled the names of the pastries peels around the edges, the letters fading.

By the evening’s end, all this investment of talent and energy—in the acting, design, direction, and writing—seems squandered on a plot that tells a story as old and used up as the last, stale donut of the day, the one far less edible than its fresh superiors. What a shame that that donut represents Letts’s play.