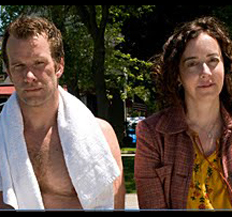 HBO’s new summer series about a man whose anatomy becomes his professional destiny is not the first place I’d look for feminist television programming. And yet Hung turns out to be a wonderfully smart, funny, and indeed feminist story of a down-on-his-luck middle-class white history teacher-basketball coach whose wife divorces him, whose house burns nearly to the ground because of an electrical short in an overloaded extension chord, and who can’t get his life together, financially, emotionally, or pragmatically.

Ray Decker, played by the handsome, valiant Thomas Jane, is an otherwise ordinary man, beset with all the problems of someone whose best years are well behind him. He was a high school baseball star, who married his high school sweetheart, never left the Detroit suburb where he was raised, and in fact lives in a tent in the backyard of the house he inherited from his parents, which burns in a catastrophic fire in the series opener. He’s an average white guy stuck in his own history, who never progressed beyond his teenage success.

His wife, Jessica, the now-faded cheerleader, played by Anne Heche in parodic high dudgeon, has left him for Ronnie (Eddie Jemison), a high school geek who grew up to be a plastic surgeon (he gives Jessica shots of Botox after their morning coffee). Ronnie is short, blinkered, and socially clueless; it’s clear Jessica is more attracted to his money than to his body. Ironically, mid-way through the season, as the economic downturn hits, Ronnie announces that they aren’t rich anymore, leading Jessica’s busy-body mother (who looks like Dr. Ruth and speaks with an inexplicable Eastern European accent) to ask Jessica if she has to keep “giving him sex.” While Jessica dismisses her mother’s concern, in a later scene, as Ronnie rolls her way to nuzzle her ear in their marital bed, Jessica summarily announces that she’s not in the mood, predicting a lot of bad sexual luck in Ronnie’s future.

In an effort to improve his odds financially, Ray enrolls in a how-to-get-rich-quick seminar led by Floyd Gerber (Steve Hytner), whose large teeth, bad haircut, and empty inspiration reads as big-L loser immediately. In the seminar, Ray reconnects with Tanya (Jane Adams), a goofy poet with writer’s block with whom he had and has again a one-night stand. When their second tryst derails emotionally, Tanya’s accusation that all Ray has going for him is a “big dick” begins an entrepreneurial opportunity for both of them. The unlikely couple embarks on an even more unlikely business venture called “Happiness Consultants,” in which Tanya pimps Ray out to various sexually frustrated (or curious) middle-class suburban housewives.

If Ray is hobbled by his own stasis, Tanya’s earnest ambitions are enough to motivate them both. Although she’s a bohemian writer trying to be a vegetarian, she takes her work as Ray’s pimp very seriously. Part of the series’ comedy comes from watching Tanya navigate in the very unfamiliar waters of sexual capitalism. She’s been unable to write for years and works as a permanent temp as a copy editor in a law firm. But starting this business on the side with Ray let’s her aspire to the personal, intellectual, and especially financial freedom that she hopes will enable her creativity. Tanya’s “alternative” values are never belittled by the show’s writers, but her self-taught cutthroat business sense makes for a comic comparison with her otherwise progressive ethics. Tanya has a nasty mother who dismisses her (played by Rhea Perlman) and isn’t particularly pretty (in fact, in most scenes, Adam’s face is made up with a kind of oily sheen), but she’s vital and lively and cares about things in a way that Ray can’t fathom.

The unlikely affection between Tanya and Ray is utterly appealing as they begin to develop a friendship based on their business partnership. Thomas Jane and Jane Adams have great chemistry and work well off each other. The whole cast, in fact, has a nice bead on the show’s quirky humor, which treads a fine line between satirical and sincere. Heche’s Jessica, for example, who still has feelings for Ray, is surprised but generous when Tanya comes to see him coach a basketball game. Tanya joins the strange family easily, befriending Jessica as she cheers awkwardly (for the wrong team).

Ray’s twin kids, Damon (Charlie Saxton) and Darby (Sianoa Smit-McPhee), are disheveled teenage misfits with weird dyed hair and soft, puffy bodies. But their peculiar relationship to both parents, neither of whom knows exactly what to do with them, gives Ray and Jessica something to bond over. When Charlie pierces his tongue, for example, both parents are horrified. Jessica, maintaining her forced cheerleader cheerfulness, doesn’t understand a thing about her alienated, goth-leaning children, but her attempts to reach them prove funny parodies of the over-sharing, trying-too-hard parent. Saxton and Smit-McPhee do a nice job performing the kids’ incredulity at their parents’ stupidity. The kids’ allegiances shift depending on which parent has more money and the most comfortable place to house them.

Hung seems to be a story about failure, about the losers with whom people associate or who they inadvertently become, but the series’ pleasure comes from the small ways in which the characters succeed in each episode, whether sexually or financially, and the little ways in which their kindness toward one another makes their lives worthwhile.

The series also demonstrates perfectly how people perform what they think others want them to be. Ray’s role as the star of Happiness Consultants isn’t natural to his personality.He might be well endowed, but he needs to be tutored by Tanya in how to play the suave, debonair male prostitute they think their clients expect. The writers regularly prove that no one’s interested in his social performance; only his sexual performance matters, and in that, he always succeeds the way he and Tanya promise.

But in each assignation, Ray learns something about himself and about women. Early in their endeavor, on his first visit to a client, Ray balks at her middle-age, plump body, begging off with a cold. After Tanya scolds him about judging people on their appearances, Ray returns, only to find the woman now skittish about following through. She admits she’s sick of her husband’s inability to please her, but only when Ray shows her the goods is she persuaded (and eagerly excited) to complete the transaction.

In fact, none of the women Ray services are conventionally attractive or behave “normally.”Tanya persuades a sexually frustrated, homely proofreader colleague from work that she’d enjoy employing Ray. Their scene together in a hotel room is a gem, as the woman unmasks their meeting as only a fantasy in which she knows Ray is playing a role, but then happily goes along with it by letting go of her own inhibitions and gleefully repeating, “Let’s fuck” until they do. In all of these instances, Ray is happy to comply, and seems vaguely moved at what he sees in these women.

At the same time, although it’s Ray’s anatomy that provides their income, Ray is the objectified sex worker, a nice role-reversal in the cosmic scheme of conventional prostitution or pornography. Ray is not the agent of his own destiny; it’s Tanya who sets up his meetings, and who scolds him when he tries to arrange dates on his own. Tanya interviews potential clients, assessing their needs and how Ray can meet them. If their business is at all successful, it’s because Tanya understands the emotions that drive their clients’ sexual desires and talks Ray through how to satisfy each customer.

In another neat foiling of presumption, Ray falls in love with Jemma (Natalie Zea), a particularly complicated client with a host of unusual demands. When he tries to date her and begins refusing her payments, she purposefully hurts him. A contrite Tanya realizes too late that Jemma’s game is to construct Ray as the victim in their relationship, to avenge her own victimhood in past relationships. But the scenario upends the assumption that for men, sex is only physical, while for women, it’s emotional, since here the roles are exactly reversed. Ray’s hapless naiveté is partly what makes him so appealing. His masculinity isn’t built to handle the situations in which he’s called on to act. He needs Tanya’s help to navigate the emotional currents of his trick’s needs. But he’s charming in part because he rises to each occasion (literally, of course, and figuratively).

Hung is a really a family drama, with a twist that makes it interesting and a perspective that makes it feminist. No one here is starry-eyed about the American Dream; everyone knows that it’s precarious at best, diseased and desiccated at worse. But the series finds something sweet and poignant, rather than resigned and bitter, about the prevailing state of affairs, drawing the characters’ humanity against the odds. In the last episode, Ray, devastated by Jemma’s betrayal, gets drunk in a bar where he’s recognized by an old rival, a man who pitched against him when he was a senior in a high school and still hasn’t gotten over the fact that Ray, who was a freshman, batted his pitch out of the park. In pouring rain, the men head to a baseball field to relive the moment. The older man throws Ray a duffel bag full of balls one by one, and one at a time, Ray hits them away, saying, “Contact,” after he manages to connect with each pitch. The other man’s middle-aged body is paunchy and sagging as he winds up to throw, the outlines of his mortality palpable against his wet shirt. Ray looks only marginally better as he sways over home plate. The men barely speak, but the scene is a wonderful, soggy illustration of lives stuck in place.

Happily, it’s the proto-feminist Tanya who gives them all hope, who swats away references to her own inferior looks (a constructed claim, since Adams is actually very cute), who glows with newly found confidence, who schemes about ways to increase their business, and who engages her clients with tough pragmatism and no-nonsense business ethics. Adams plays beautifully the blooming power of the underdog who comes into her own. In the last episode, as Ray stumbles back to his tent wet and drunk to find Tanya waiting for him with a wad of cash from Jemma, Adams and Jane perform a sweet scene of friendly intimacy, need, and pleasure that portrays one of the most moving, innovative, insightful relationships on television.