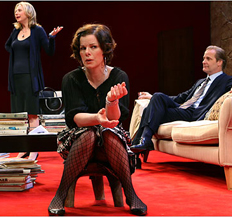 Yazmina Reza writes crowd-pleasers, plays that appear to give the audience something meaty on which to chew, but essentially put her characters on a predictable collision course, a highway of lite moral complexities in which they find themselves unwittingly and sometimes unwillingly debating ethical issues that finally sound a bit hollow.

But Carnage’s farce kept me from taking it too seriously. Instead, I enjoyed the four fine actors volley Reza’s dialogue (translated by Christopher Hampton) back and forth with superb timing and physical comedy. Although many critics find Carnage a pale imitation of Who’s Afraid of Virginia Woolf, I thought the play too farcical to accept that comparison.

Sure, God of Carnage concerns two couples who begin their evening with polite, decorous banter, trying to come to terms with a school yard altercation that’s left one of their sons “disfigured” by the other’s aggression. And sure, the evening ends with both couples drunk and disheveled, their secrets and pretensions summarily revealed, and all of them crumpled in defeated heaps around a living room that’s been trashed by their exploits. But this superficial resemblance to Albee’s classic domestic conflagration makes the comparison unfair to a comedy that wants to bite, but ultimately patches up any breaks it leaves in the skin.

Reza concocts a delightful, short evening of smart comedy by four actors (Tony Award nominees all) who’ve definitely got game. God of Carnage’s confectionary pleasures derive mostly from its actors’ obvious pleasure in zinging one-liners back and forth for a quick 90 minutes under the smooth, confident, and well-paced direction of Matthew Warchus. The actors perform with comic élan and style, delivering this light parody of contemporary parental mores through the social, class-based competition it stages between two white, heterosexual, upper-middle class couples that feels to them much more serious than it appears to us.

In Reza’s conceit, Alan (Jeff Daniels) and Annette (Hope Davis) visit Michael (James Gandolfini) and Veronica (Marcia Gay Harden) to resolve the crisis precipitated by Alan and Annette’s son’s “disfiguring” attack on Michael and Veronica’s boy. The playground conflict has left Michael and Veronica’s boy missing two of his teeth, a crisis apparently severe enough in the bourgeois cosmology Reza depicts that their parents’ draw up what sounds much like an official legal agreement about what’s happened and how they’ve all agreed to respond.

The boys’ skirmish occasions what escalates into their parents’ all out battle to maintain their shredded self-respect and dignity. In a predictable but nonetheless enjoyable trajectory, their awkward and contrite meeting turns into a scathing indictment of neglectful child-rearing, corrupt pharmaceutical practices, pretentious art venerating, and bourgeois propriety that barely covers the quickly melting icy veneer on which these two marriages skate.

The meeting, at Michael and Veronica’s faux-modern co-op, begins with the superficial chatter of two couples who don’t know one another reluctantly thrust together to work out their boys’ conflict. But as their conversation continues past the point at which Alan and Annette should have said their good-byes, they begin to recognize in one another the mirror images of their own failures and falsities.

Jeff Daniels, as Alan, performs a perfectly pompous, self-congratulatory high-powered lawyer with a cell phone glued to his ear. Every time it rings, he announces, “I have to take this,” loudly imposing his pretentious conversations on the gathering then appearing indignant when the other three overhear his business. Daniels delivers a sharp, wry performance as a man puffed up by his own self-importance.

A land line phone also rings constantly throughout the play, as Michael’s mother checks in with her son while she’s at a doctor’s appointment. Gandolfini, as Michael, gets the timing just right, switching from the heat of battle with his guests to an enforced calm to speak with his aging, unwell mother, whose plaintive calls regularly interrupt the couples’ engagement. In one of Reza’s too convenient, calculated but perfectly funny coincidences (mild spoiler alert), Michael’s mother is told she’ll be treated with the toxic medicine whose effects Alan has been coaching his client to deny in his cell phone exchanges.

As their meeting devolves into a wonderfully physical brawl full of alcohol, ruined art books, projectile vomiting, and a pretentiously proffered cake, the actors rise to the comic occasion with impeccable style. Each character has his or her own meltdown, following an arc that requires the actor to move from faked, attentive concern into high umbrage, up to a physical crisis that dishevels their clothing and overturns some furniture, then down into resigned indifference to the revelation of their common and essential imperfections. Each character is unmasked as much less than he or she first appeared–more ordinary, whiny, and unhappy than the accomplished, socially exceptional people they first present.

To Reza’s credit, the characters’ devolutions occur without regard to gender. Alan and Michael reveal themselves to be as shallow and unhappy as Annette and Veronica. No one is more responsible than another for their mutually destructive encounter. Gender alliances shift throughout the play. Halfway through, the men share cigars and bourbon and a bitter understanding of the silliness of their lives, and the women pair off to commiserate by ridiculing their husbands.

At other moments, the couples rearrange themselves to express at least a superficial empathy, Alan for Veronica and Annette for Michael. When the couples inadvertently reveal their pet names for one another (Alan and Annette call each other “Woof Woof”), their intimacies seem childish and reductive, no more meaningful than the names their sons called each other on the playground.

Gandolfini’s presence inspired the audience to applaud at the play’s opening the night I attended (5-2-09). As the actors waited for the clapping to die down, I saw Hope Davis wink at Gandolfini, a lovely, warm tribute to his fandom before the actors began to chew the scenery. The affection the actors clearly feel for one another shows in their beautifully orchestrated performances.

In fact, what might at first seem a cynical casting choice calculated to boost box office turns out to be a coup for Gandolfini in his post-Tony Soprano era. Watching him transform Michael from a husband trying his best to conform to the overly polite customs of upper-middle-class behavior to a man who can’t stand the suit coat he wears, and happily rips his shirt out of his pants when the going gets rough, is one of the production’s many pleasures.

Likewise, Marcia Gay Harden, whom I followed on television in her stand-out performance as the Iago-like lawyer for the corrupt corporation on Damages this season, offers a grounded and hysterical turn as Veronica. Her horror when her precious art books are accidentally covered with vomit is a high point of the evening.

Hope Davis is also terrific as Annette, the character whose movement from good to bad is the least predictable. Perhaps because of Davis’s inherently sympathetic presence, and her slight fragility, even when she’s performing indignation, Annette becomes the fulcrum of the couples’ full-pitch battle. When she indulges in alcohol and quickly gets drunk, Davis captures the pleasure, exasperation, and fear of a woman unaccustomed to losing social and emotional control. She’s also very funny.

All in all, Reza satirizes the wreckage of heterosexual marriage in God of Carnage, the petty bitterness that courses under what are carefully calculated to look like successful, luxe upper-middle class relationships sailing into their pre-destined futures without a ripple on the glassy waters of their lives. She satirizes how children become possessions, simple pawns for adults who at best treat them indifferently, and at worse, actually despise them.

While the comedy lets the audience laugh, Reza sneaks in recognitions that balance the evening’s affects. Somewhere in the uproarious meeting, the playwright comments on how people who no doubt mirror many in the Broadway audience live their lives. Under the humor, she urges spectators to consider what matters and what doesn’t, what we can control and what we can’t. By continually shifting the allegiances across couples and between the men and the women, Reza clarifies that no one wins, and that the stakes are equally high or low for all.

The production’s vivid realism and impeccable acting make it easy to swallow and probably mitigates whatever gentle punch to the gut Reza might intend. Watching actors more often seen in serious roles exercise their comic chops is entirely enjoyable. That God of Carnage concerns squarely middle-aged people also makes it a refreshing antidote to the many contemporary plays that address the angst of 20-something white characters figuring out how to live.

Reza examines the superficially comfortable, apparently successful lives of white upper-middle-class heterosexuals at the point when they’re supposed to be reveling in their achievements. God of Carnage demonstrates that the façade of their marriages and their families are already weakened and could be destroyed by the devastating moral emptiness and social pretension that’s chewed into their relationships like termites into the family house.

God of Carnage isn’t Who’s Afraid of Virginia Woolf, but it’s a great deal of fun.