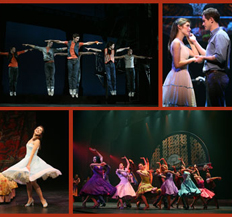 Late in his distinguished career, Arthur Laurents is making a new name for himself rethinking classic American musicals for which he was an original, key collaborator. After the spectacular success of his recently directed remount of Gypsy, with Patti Lupone, for which he wrote the 1959 book, Laurent has again transformed his writer’s eye into a director’s perspective on West Side Story, for which he wrote the book in 1957.

If his approach with Gypsy was to find its authenticity by sharpening the edges of the three leading characters, his concept for West Side Story is to more closely reflect the lives of the Puerto Rican gang members in 19 50s New York who anchor one half of the story’s revision of Romeo and Juliet. I admire Laurents’ decision to hire Lin-Manuel Miranda (In the Heights) to translate some of the show’s dialogue and two of its key songs into Spanish. I went to see the show (at the Palace Theatre, 4/4/09) hoping that the choice to honor its characters’ ethnicity might bring the musical new poignancy. But somehow, Laurents’ connection with the material seems less organic than gimmicky.

The Spanish language addition is more than a publicity stunt. The difference between the Sharks and the Jets becomes palpable and meaningful, and the very different textures of their adjacent lives in Manhattan starker, when the Sharks curse the Jets in Spanish and speak to one another in their own language. The fact that some portion of the Broadway audience will be marginalized from their dialogue matters, too, to the extent that it’s worthwhile to put a mainstream American audience in the position that non-English speaking immigrants in the States feel every day. The simple difference of language could productively underline the condition of being “othered” in an English-dominated, predominantly white culture.

But many of Laurent’s other choices work against the realism the Spanish dialogue and songs might provide. The stunning visual design woos the eye with gorgeous, romantic lighting, especially for “There’s a Place for Us,” a number choreographed as a utopian fantasy for Maria and Tony, in which the considerably brightened stage radiates with what feels like vibrant sunlight and vital warmth. Otherwise, the darkened set, too, seems to take place in something of a “nowhere.”

Although the design is vaguely reminiscent of Jo Mielziner’s concept for Death of a Salesman, with abstracted New York apartments sketched as wings on the side of the stage, the décor does little to evoke what it feels like to be Puerto Rican (or, for that matter, white) and poor and young in Manhattan in the 50s. There’s something very clean about this production, even though the young male actors wear conspicuously applied dirt on their faces and arms to give them a rough and tough appeal. Later, after the tragic rumble by the highway, their wounds, too, seem pasted on. They resemble the blood and gore of a B horror film, instead of the hard earned, knuckle-bruising knocks of a senseless fight.

The production, in fact, is peculiarly unconvincing, despite its obvious heart. A lot of love and attention has gone into this revival, but the only place the lavish affection pays off is in the dance numbers. Joey McKneely’s ’s reproductions of Jerome Robbins’ original choreography thrillingly recalls what it might have been like to see those moves for the first time, when the idea of dancing gang members was novel and exciting. In the Prologue and the opening “Jet Song” number, the boys lightly leap into the air, rising and falling with a kind of strenuous effortlessness. The dance at the gym, the horrible rumble, even the Jets’ abuse of Anita in Doc’s drug store, all are accomplished with an attention to detail that brings the choreographic archive alive.

The production’s more inferior aspects stem from poor casting choices. If Laurents aimed for verisimilitude with his choice to texture the production with Spanish, casting Josefina Scaglione, a lily-white Argentinean opera singer, to play Maria compromises what might otherwise be seen as a racially progressive gesture. Most of the Sharks and their women at least look Latino, with olive-color skin and shiny dark hair. But Maria appears practically corn fed; she and Matt Cavenaugh, who plays Tony, could be brother and sister.

For the star-crossed lovers to find and fall for each other, as a result, doesn’t seem taboo-breaking as much as it does pre-ordained. That Maria’s youth and virginity should be signified by her very white skin compromises the importance of the lovers’ difference from one another, and seems even more glaring in a production that wants to emphasize ethnicity. If Laurents intended to address the politics of skin color in minoritized cultures, his casting choice for Maria might have been interesting.

But nothing in the production suggests that this was his intent. In fact, Maria is mocked for her idealism and her naïveté by actors whose Latino/a ethnicity is generally more visible on stage, which gives those scenes an odd air of intra-race jealousy, instead of the concern and disapprobation of a community truly fearful for what might happen if miscegenation is condoned.

In fact, rather than making any of the by now mythic story fresh and surprising, this production takes the audience and the cast through our paces, bringing us to the sorry end through a well-traveled route. None of the actors’ interpretations reveal new angles on their characters’ situations. Even though thinking about race and class—especially during the nascent Obama administration—has changed considerably in the U.S. since the original production opened on Broadway, this revival captures none of that new energy or insight. The performance feels not so much like a slavishly faithful, museum-quality revival, but more like a remounting under glass, distanced and strangely clinical.

The cast’s youth might contribute to this remove. While many of the Sharks and Jets are terrific dancers who convey their slightly drawn characters with convincing body tics and emblematic physical signatures, and the principals have beautiful, resonant singing voices, no one in the cast stands out for their acting. While their talents energize the musical numbers that provide the revival’s most enthralling moments, the cast’s acting deficits make the book’s more emotional moments disappointing. No one seems to discover anything in the moment; they present their interactions—romantic or hostile—as a done deal, without showing us what prompts them to act.

I waited throughout the production to be genuinely moved, but felt instead continually disappointed. Only “There’s a Place for Us” brought welcome goose-bumps to my arms and a lump to my throat, and that was because a young red-headed boy of perhaps 10 or 12, who’d lurked in the back of some of the gang fight scenes with Anybodys, was trotted out to sing the first few phrases a cappella, while Tony and Maria fled offstage to change their costumes.Something about the musical change and the transformation of the production’s physical gestalt for that number approached the heart wrenching emotion I’d expected from the whole evening. (On the other hand, the use of the boy’s pristine soprano reminded me a bit too much of “Tomorrow Belongs to Me” in Cabaret, for which recent productions have used the same eyes-of-the-innocents gesture to manipulate audience response.)

Even the production’s last scene, in which Tony roams the abandoned streets, calling for Chino to slaughter him as Tony believes Chino has killed Maria, seems manufactured, offering canned, pat feelings rather than real emotion.When poor Anybodys—in a haircut that makes her look like Hilary Swank as Brandon Teena in the film Boys Don’t Cry—approaches Tony to try to call him back to his senses, he snarls, “You’re a girl. Act like one.” Too bad that a production that tries—even if it fails—to be racially complex has to end, as usual (and as the original book dictates), by damning the one character in the musical performing herself through more complex gender identifications.

Hearing the orchestra play the soaring score and listening to those wonderful lyrics, I was only sorry that the singers conveyed the music’s emotion with more technique than heart. Laurents and his cast missed an opportunity to say something much more, to help us think through racial difference in new ways in a historical moment in which day to day politics already lead the way. In this West Side Story, the theatre is left lagging behind.

3 thoughts on “West Side Story”